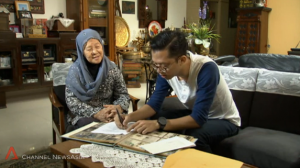 Thailand – 13/05/15 International DNA testing company EasyDNA, has its ancestry DNA test featured on Channel News Asia Singapore’s(CNA) documentary Down the Line. The popular TV documentary follows the adventures of some of Singapore’s biggest names on their hunt for their family history, revealing their past.

A Singaporean Malay,Sezairi, best known as the 2009 Singapore Idol, appeared in the programme Down the Line. The celebrity wanted to know the origins of his grandmother as she appeared different from her other siblings, appearing to have predominantly Chinese features. EasyDNA’s ancestry test indicated that her genes were prominently East Asian (China/Japan/Korea region). This was proven true as further research was carried out by interviewing old relatives that lived in Malaysia. These relatives in fact confirmed that she was actually a Chinese baby given to a Malay family as difficult circumstances at that time made it impossible for her birth mother to keep her. The story was kept a secret all these years.

In relation to their ancestry DNA testhaving featured in the TV documentary, an EasyDNA representative has stated that “Not knowing ones origins is very alienating or even painful to an individual; Sezairi’s grandmother’s feelings mirrorthose of thousands of other people when she states, just as grandson asks her whether she really wants to see the results of the test,“I would rather know, than not know”. As he reveals theresults, there is a ripple of emotions which are very evident in the video as Sezairi, pointing to EasyDNA’s ancestry results, tells his emotional grandmother that she is not from the Malay area. EasyDNA has had cases in which their ancestry and lineage tests have helped individuals connect to their ancestry. We are glad to have brought closure and helped this individual discover her true roots, thus helping her find out her true identity and origins”.

The company offers lineage testing and ancestral origins testing which is carried out using a simple oral swab sample collected by rubbing the swab inside the mouth for 10 seconds. The company can then analyse the sample to determine the biogenetic origins of the individual tested, providing them with the migration patterns of their ancestors, haplogroup affiliations and other information that can help connect the tested individual to their ancient roots. Click here for more information about the company’s ancestry testing services.

Channel News Asia Singapore is viewed across more than 25 territories in Asia but is also viewed in Australia and the Middle East, reporting global developments and news pieces with comprehensive coverage. Sales and Marketing manager for easyDNA highlights how being featured on such a quality channel and moreover, on such a widely watched TV documentary like Down the Line “has been a good opportunity for easyDNA Singapore to get some quality brand exposure as well as service exposure. As a company we have been constantly working at enhancing and diffusing our image and brand through reputable TV shows, interviews and other forms of marketing. This is an avenue we will keep pursuing and is part of the implementation of a marketing plan to increase brand awareness and elevate our brand globally, in every country we operate”.

EasyDNA has featured in many TV shows and radio transmissions across the world. Most recently, the company was featured on Lithuania’s most watched TV shows “KK2 Penktadienį”, where EasyDNA carried out a paternity test on a man who became a father at age 76, making him break the record as Lithuania’s oldest father.

EasyDNA is a leading international DNA testing service provider and has been operating in the country through easyDNA Singapore. The company also has offices in Thailand, Malaysia and The Philippines. EasyDNA sells its whole portfolio of DNA tests including maternal lineage, paternal lineage and ancestral origins testing.